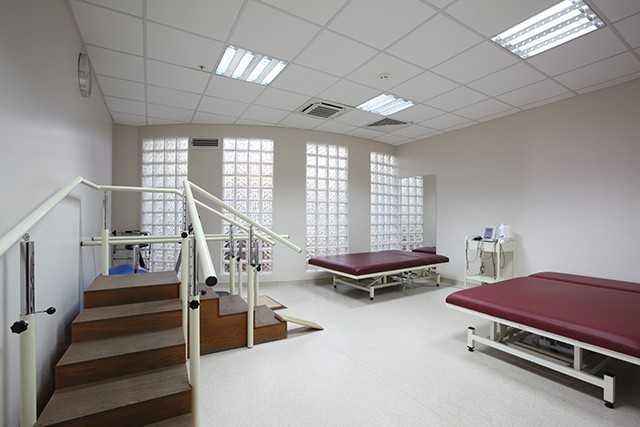 Rehabilitation means the restoration of functions as word meaning. According to the physical therapy method, the treatment process lasts longer and requires active patient participation and effort.

Orthopedic problems such as fractures, dislocations, ligament injuries, meniscus and ligament tears should be rehabilitated after surgical treatment, or after splinting, such as plaster or splint. The purpose of rehabilitation is to return the patient to normal activities as soon as possible.

Applications are generally referred to as ORTHOPEDIC REHABILITASTON. In cases of injuries such as shoulder, tongue and hand injuries, the pathological condition in the form of fracture and strain is tried to be treated by the physician. However, healing does not just mean getting rid of the pain or healing of fractures and cuts. Complications such as various limitations of movement, pain and weakness due to various movements may occur after injuries or surgeries. These complaints prevent the patient from continuing his / her daily life as it was. For this reason, a good orthopedic rehabilitation process is necessary for the patient to return to his / her daily life and old condition as soon as possible after fractures or surgeries.

Sports Injuries
Nowadays, rehabilitation is very important in the treatment of sports injuries as well as good orthopedic treatment. It lead shorter duration of treatment, more effective treatment and the performance of the athlete as high as possible.

Fracture Rehabilitation
Because of disorders in the joints, bones and adjacent tissues such as fractures, dislocations and sprains that occur after traumas, the patients are goes to the physician with symptoms such as pain, bruising, bruise, swelling, deformity, symmetry deterioration, inability to move and restriction of movement. After physical examination and radiological examinations, the orthopedic surgeon treats fractures, dislocations or sprains, sometimes with applications such as gypsum-splint. After this treatment ends a long process begins. The operations performed, such as plaster – splint, weakens the surrounding muscles. Strengthening these muscles and restoring them are necessary for the patient to return to daily life.

In addition to the normal treatment process, sometimes side effects may occur. These side effects can make the treatment program a longer and serious process. Disturbance of circulation, pain, reflex irritations, especially in peripheral joint fractures such as the shoulder, elbow, wrist,and ankle can cause a complication called reflex sympathetic dystrophy (RSD). Early diagnosis is very important in RSD.

The purpose of fracture rehabilitation is to restore the affected area to the old level. The joints around the fractures become prone to lose their movement and the muscles in this area become prone to melting. Rehabilitation practices are very important to prevent this situation.

After knee arthroscopy, an exercise program is needed to increase the knee movements. These programs are administered by physiotherapists under the control of physical therapists. Patients are given 2-3 days after the operation and 90-110 degrees of bending (flexion) is reached at the end of day 3. On the 15th day active rehabilitation is started. After 15 days the the crutches are terminated. The knee brace is continued for 6 weeks. Need 6-8 weeks to start cycling. The return to sports is allowed in 4-6 months.

The anterior cruciate ligament consists of rigid and inelastic fibers. It extends from the middle to the front in the knee and from the outside to the inside. This bond limits the forward and inward and outward movement of the tibial bone and is the most important factor in ensuring the stability of the two main bones. Anterior cruciate ligament tears usually occur during jumps or sudden deceleration movements as they descend to the ground during running. The first emergency treatment is the combination of rest – ice – elastic bandage – lifting up. Surgery or conservative treatment is planned according to the patient’s condition.

Meniscuses are structures that resemble a cushion at the intersection of the two largest bones forming in the knee region. Meniscus can be ruptured due to reasons such as index rotation, folding caused by sudden movements and overloading over a single knee in contact sports such as football. Anterior cruciate ligament tears may also be added to these injuries due to impact and sudden movement in athletes. As the age progresses, the meniscus cannot be ruptured, but it may tear in time due to degeneration and damage. Degeneration tears occur in all age groups. Tension and swelling in the knee, shortening of the range of motion in the knee, fluid collection in the knee, and the engagement and locking caused by falling of the ruptured meniscus piece into the joint are the most common symptoms of meniscus tears.

Treatment of meniscus tears begins with resting, bandage treatment and ice application. Physical therapy is applied in patients who are not suitable for surgical treatment. Surgical treatment is planned in cases where the meniscus does not heal and complaints persist. Meniscus surgery is performed almost exclusively by arthroscopic surgery. The meniscus causing tearing and complaint causes abrasion in the cartilage and may trigger calcification later. Patients with young and active social life should be operated. After surgical treatment, the physical therapy and rehabilitation process is very important for the patient to fully recover.

Endoprosthesis is the reconstruction of the joints with movable artificial joint models consisting of metal alloys and synthetic materials. These reconstructions are applied to movable joints such as shoulders, elbows, hips and knees.The endoprosthesis drug is applied in patients who are not considered to benefit from knee arthroplasty, knee arthroscopy and orientation surgery despite the injection therapy and physical therapy methods, and who continue to complain despite previous surgery. Nowadays, the life of the prostheses has increased by 25-30 years. However, all treatment modalities should be tried before prosthetic surgery in patients under 55 years of age. The prosthesis application can be done easily over the age of 65 years.

Rehabilitation after surgery will be the most important factor in determining the postoperative status in knee prostheses. The aim of rehabilitation is to prevent negative effects arising from immobility, to provide a functional range of motion between the joints, to provide joint stability, to strengthen muscles around the joint and to ensure that the patient is completely independent in social life.

The aim of rehabilitation in total hip prosthesis is to protect the patient from the negative effects of immobility, to provide the patient with painless movement ability and to strengthen the muscles around the hip and to make the patient independent in their daily activities.

For detailed information, leave a message and we’ll call you !